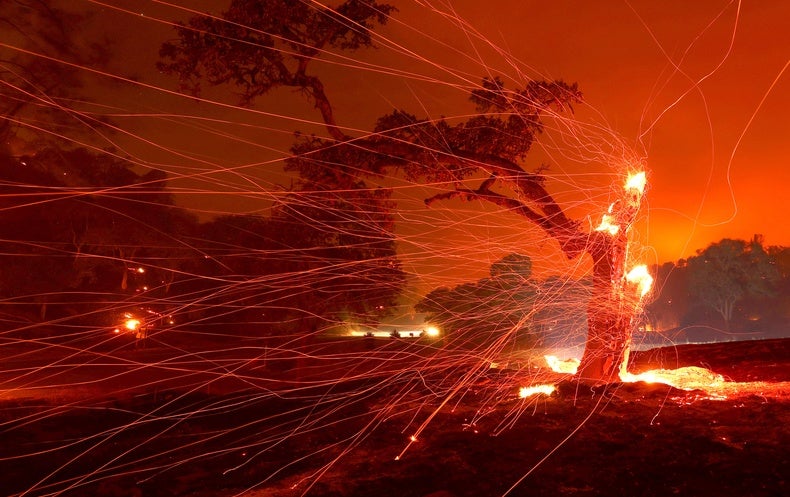 Firefighters battled nearly two dozen wildfires in California yesterday after a week of raging blazes blackened more than 1 million acres across the state.

The fast-moving fires, which are seen by many scientists as a sign of climate change, have killed five people, destroyed more than 1,000 structures and forced thousands to flee. More than 238,000 people either evacuated or were ready to go as more thunderstorms threatened to light new fires yesterday afternoon, according to officials.

Still-active fires are affecting at least 23 counties in Northern California, stretching from Butte to Fresno. Two of the blazes rank among the largest in state history.
The LNU Lightning Complex Fire, a group of fires centered in Napa and Sonoma counties, has grown into the second-largest blaze ever seen in California. The SCU Lightning Complex Fire, a cluster of blazes in Santa Clara, Alameda and nearby counties, is the third-largest.

Altogether, the fires have burned an area the size of Rhode Island.
"The scope [of the damage] is absolutely astonishing," said Daniel Swain, a climate scientist at UCLA. It's "hard to impress on people just how vast the acreage burned is, especially considering there were no strong offshore winds" to drive the spread.
President Trump on Saturday issued a major disaster declaration to fulfill a request by Gov. Gavin Newsom (D) to bolster the state's emergency resources. Meanwhile, the National Weather Service issued a red flag warning for more thunderstorms and lightning through today.